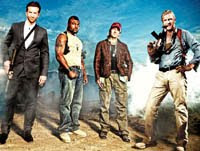 [6.55 - French Time] Great story by the amazing She Who Must Be Read, aka Nikki Finke of Deadline.com, about the fascinating development nightmare behind The A-Team. The movie adaptation of the classic TV series opens this week in the US and on June 16 in France (right into the FIFA World Cup frenzy).

It's not the laughable but unsurprising number of writers used on this movie (11, including James Bond scribe Bruce Feirstein) which interests Nikki but how a Fox exec handled the project with Jason Bourne, 24 or Tarantino in mind.

And from the last trailer I've seen it still looks like a SNL skit. Too bad there is no Plan B.