LIONS, AND TIGERS, AND BEARS! OH, MY! 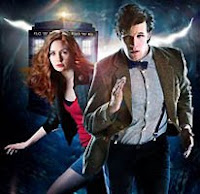 Some friends have concern for the Doctor (Matt Smith) and a very strange message must be delivered to him. As you can't use FedEx for that sort of things, Amy Pond (Karen Gillan) and our Time Lord get it through a very complicated process and what it reads means troubles - nasty type. This leads them to Stonehenge where hides the sum of all fears.

It's very sad for Stephen Fry that he called Doctor Who "children's TV" (http://www.telegraph.co.uk/culture/tvandradio/7831560/Television-is-only-made-for-children-moans-Stephen-Fry.html) the week Steven Moffat, one of the most talented contemporary TV writers, delivers the first half of series five's big finale. Timing ist alles...

« Everything that ever hated you is coming here tonight. »

The Pandorica Opens is definitely not "chicken nuggets" but Omelette aux fines herbes television right from the pre-credits sequence with those friends mentioned above, distant in space and time, and a funny lipstick escape. Past credits, director Toby Haynes brings us to big adventure with a splendid horse ride to the settings of Doctor Jones and the Stonehenge Box of Doom.

This is not CBBC or CBeebies either for us or for poor Amy, who has to cope with a ugly "beach head" from a familiar army of ghosts from the Doctor's past. The rest of the episode is as brilliant provided you accept that the Band Aid of villains can form an unholy alliance against what they consider a greater menace than each of them - unless they are manipulated by some shadowy mastermind?

The Pandorica Opens is all adventure, comedy (Matt Smith in an hilarious speech) and tragedy on an epic scale, with a lot of pleasant surprises like the return of handymen you wouldn't like to meet in your local department store. There are some "cracks" in the script but dots from series five story arc are put together in a more natural way than previous episodes were linked to the arc itself.

Will part two match this? As the excellent Simon Brew writes on Den of Geek: « We're used, with Doctor Who, to having great set-ups for finale two-parters now, only for the back end of the story to struggle to measure up. Can Mr Moffat break that curse? » (1). Or like your humble servant wrote it less nicely on Twitter and Facebook: the show has a record in screwing up second parts. But for now, it's top-notch television for gourmets.

Next Time: Silence will fall.