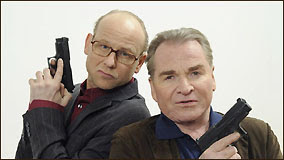 Peter Lindburg, a German TV star who plays a cop in a long-running "Krimiserie", learns his show is axed while watching television. He returns to his hometown to work on his own script and finds out it's not so easy to be a detective when he witnesses a real murder.

The local police doesn't take him seriously, so he decides to investigate with the actor who played his assistant.

Munich-born actor Fritz Wepper is known all over the world for his character of Harry Klein, who first appeared in the crime drama hit Der Kommissar from 1969 to 1974. Then Klein became the assistant of Oberinspektor Stephan Derrick (Horst Tappert) in 281 episodes of Derrick, between 1974 and 1998. But his resume includes Cabaret (1972), Luc Besson's Le Dernier combat (1983) and several other dramas, like Zweï Brüder (1994-2001), Mord im bester Gesellschaft (since 2007), and Um Himmels Willen (since 2002).

And now Fritz Wepper is Peter Lindburg in Lindsburgs Fall, an excellent TV movie aired by the ARD network on friday, the week of his 70th birthday. Lindburg plays Kommissar Kämpfer in the popular crime series Blaulicht. Kämpfer's catch-phrase: "Conny, hier stimmt was nicht!" ("Conny, there's something wrong!"). Bernd Michael Lade - who played a Hauptkommissar in one of the series of the venerable Tatort - is Mike Häusl, the actor who plays Kämpfer's assistant Conny.

Lindburg learns incidentally that his series is axed, and the best offer of his agent is a pilot for a show with dogs called Colliewood! Depressed, he decides to work on his own crime script (Ein Mann, Ein Mord) in his hometown. But one night he witnesses a real murder and local police finds the idea of TV's super sleuth as a witness of a true homicide hard to swallow. Especially when it bothers the Staatsanwalt - the State public prosecutor - Dr. Eugen von Wangenheim (Francis Fulton-Smith). And Peter must ask his former assistant Mike/Conny to help him on his first non-fiction case.

Written by Marie Reiners and Sylke Lorenz and directed by Franziska Meyer Price, Lindburgs Fall is a well-crafted and pleasant crime comedy with a nice touch of satire: Peter learns Blaulicht is axed while watching a Boulevard-Magazin (an entertainment news programme). When he arrives in his agent's office, the man (hilarious Hannes Hellman) tries to convince by phone an actress named "Veronica" to accept the role of a talking sausage in the last "Tim Schreiner" movie. And there are of course some funny and elegant nods to Derrick.

Lindburgs Fall is produced by ndF: Berlin for ARD Degeto. We would like to see more of Peter Lindburg.