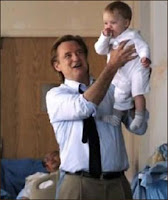 « And you all get the power.
You all get the best.
When everyone gets everything.
And every song everybody sings. » (Opus, Life is Life)

Miracle Day is almost halfway through its 10-episode run and not only the fourth iteration of Torchwood definitely doesn't live up to its 2009 miniseries predecessor Children of Earth. But moreover this co-production between US cable channel Starz and BBC Worldwide Productions may well be remembered by many as a major disappointment. The search for the truth leads the gang and director Billy Gierhart to Los Angeles. Because we well know "the truth is out there", and so does co-writer X-Files veteran John Shiban (with Jim Gray).

« Look at that horizon! We've reached the edge of America, » marvels Gwen Cooper when they arrive at Venice Beach, because it's the coolest place to prepare a raid on a corporate HQ in L.A. It's lucky the pharma company is not based in Boston. There's cholera in Boston, helpfully explains Esther sister's Sarah (Candace Brown). And every now and then someone pulls a Basil Exposition, like Dr. Vera (Arlene Tur) when she develops to Rex what is Ellis Hartley Monroe's Dead is Dead [Nanananana]. Ellis Monroe is "the darling of the Tea Party", a right-wing politico whose movement asks for segregation of those "who should have perished" and by persisting "are draining ressources of healthy living citizens".

With an actress like Mare Winningham you could expect the character to be the match of Lynne Warner, the Secretary of Defense played by Sharon Gless in The State Within. A worthy rival to Danes, a source of trouble for Fred, Shaggy, Daphne and Velma, not the caricature she is. Monroe is just the last step to Danes's access to messiah status and in the end the triangle (John de Lancie? Beldar Conehead?) tells it all: « But we already have Oswald Danes. We don't need another. » Before disposing of her in a clumsy nod to Goldfinger. This foray of Torchwood into American politics really makes things worse, whatever the subtext of Miracle Day is.

How reassuring, by the way, that in such troubled times the new prophet is a pedophile and murderer who missed the bus to Hell. Bill Pullman has a great scene when Oswald opens the bottles and enjoys his hotel room. That's before he does his Second Venue speech and the surreal Lion King thing with the baby in the "plague ship" hospital. « Dead is not dead. No, not anymore. Life is life. » [Nanananana]. « This is disgusting, » comments Dr. Vera. « I know! » squeaks Ozzie's fangirl Bobbi Flekman Jr. (YOU said it, ladies). No wonder why Ellis Hartley Sarah Palin Monroe desperately needs a coffee after that.

« I don't want to live forever. Especially like this. »

The Mystery Machine "Travelling circus folks" are no better treated as they go IMF (Improbable Missions Force) to steal a data server and switch it with another. Fortunately Rex has seen Sneakers. Jack quotes George Eliot and shows less life than 007 in A View to a Kill, until he remembers good old Captain Jack during the assault. And what did Esther expect when she phoned child protection? Gwen shares her time between her family matters and impersonating Hustle's Stacie. Rhys (Kai Owen) provides some sort of comic relief - at least he spared us the Risky Business scene, and remote Vera is the voice on healthcare.

You almost wish the polite assassin and old school artisan, played exquisitely by C. Thomas Howell, could do his job properly: « They are everywhere. They are always. They are no one. » Unless his job is to hold our attention long enough for Rex to shoot him in the throat (no more sound of C.) Do the Torchwood US newbies come from the Keystone Cops branch of the CIA? « And soon, the families will rise. ». Esther and Rex wish it's not theirs.