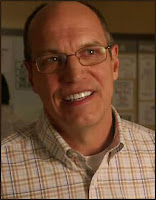 Torchwood: Miracle Day - Episode Five (The Categories of Life). The world population is now divided into three "categories of life". Gwen (Eve Myles) is in Wales with her husband Rhys (Kai Owen) to rescue her father from one of the overflow camps set up globally by Pharma giant Phicorp for the first two categories.

« Look, Torchwood's gone, okay? It's just a name these days. » It means something when even the characters of Miracle Day look like they know things don't fit. « Do you think I'm useless? » asks Little Miss "Yeah, but I'm CIA" Sunshine to the officially former Captain Jack (« He likes to call himself Captain Jack, but I'm not buying that. ») Dr. Vera would be entitled to ask the same question after weeks attending Washington D.C. medical panels and no one bothered to email her that it was finished. But Vera's embarassment is all for a bit of exposition, like those irritating news bulletins. Is it Baa Baa Black Sheep or what?

Talking of embarassment, how can fugitive Gwen Cooper fly with a passport and an alias already used for the Phicorp raid? How can one of the gang even take a plane without being noticed by the CIA or by their presumed nemesis Phicorp, a global contractor with infinite resources. Are Keystone agents Esther and Rex contagious? Gwen is unrecognizable, below her own standards. « Andy, don't be so thick, » she says to her former colleague Sergeant Andy (Tom Price). But who acts a Parker and Penelope fantasy with her hubby at the airport and makes fool of herself in front of a military until she admits a break-in will do better? Hey, it's about her dad! Who ignores that at the end of the episode?

Apparently Torchwood: Miracle Day is a "political thriller" (1) says respected American writer and producer Jane Espenson, who penned The Categories of Life. The "thrill" is widely discussed but in this "new age of care and compassion" we do have politics from both sides of the pond: « No NHS. Who's paying for all this? Phicorp. You've got healthcare being run by private business. And believe me, just the start of your problems. » Stateside, it's poor Dr. Vera - the gang's former D.C. political correspondent - who deals with caricature, once formally accepted amongst the "Freedom Fighters" (« That makes you sound like terrorists. »)

And the Ellis Monroe of the week is Colin Maloney (Marc Vann, who deserves better), the misogynist, racist, Hilary Duffist, Phil Collinsist and insensible camp administrator. Maloney has his own cart with a General Lee horn! But even a low-level nazi-type bureaucrat (he does an explicit "Jawohl" in case you hadn't noticed) must have his self-esteem and Vera should have thought twice before calling him a "stupid little man" during a hard day at work. Full-time member of Clue Club and she already gets what is obviously intended as her Ianto Jones moment, as looms the awful truth: the forces behind Phicorp are familiar with Godwin's Law.

And Jack? He plays hide and seek with Oswald and tries to convince him to "become a hero". Why not? The man is a pedophile and murderer who lost his ticket to Hell and was offered a spokesperson job from a big corporation, nice hotel rooms, a limo, cohorts of fans and his own groupie Jilly Drescher Flekman (Lauren Ambrose). Esther and Rex are indeed contagious after all. And we're looking forward to Bill Pullman's next project to erase the trauma of the rally speech.

The Categories of Life is directed by Guy Ferland. Now two aspirins, please.