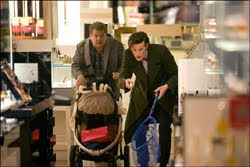 Doctor Who - Closing Time (Series Six, Episode Twelve). In which the Doctor meets an old friend, takes a job, and faces old foes.
« Take my shoes off and throw them in the lake.
And I'll be 2 steps on the water. » (Kate Bush, Hounds Of Love)
Doctor Who is more popular than ever with Matt Smith and under Steven Moffat's tenure. Its ratings stay healthy in an environment where TV consumption has evolved beyond overnights. Its brand is commercially at the top worldwide and the programme managed to conquer the US market. Moffat's narrative approach is supported by a majority of Whovians, seduced by his multi-series high concept soap story arc conundrum. And the work of his fellow writers is unreservedly hailed as genius. Never mind if some old fans, unmesmerized by the big timey-wimey scheme, may choose to leave.

As the sixth series's second half is about to conclude, Closing Time writer Gareth Roberts brings back Craig Owens from The Lodger - the episode he wrote for the previous series. Comedian and TV personality James Corden is a better actor than funnyman, even if his contribution to the 2011 edition of Red Nose Day was undoubtedly the best thing of the charity evening. He succeeds in portraying Craig as an engaging chap in full paternity angst mode when the Doctor returns in his life. His friend Sophie (Daisy Haggard) has left the young man with their baby, Alfie, for the weekend.

Kudos to Gareth Roberts for launching an instant internet sensation when we learn from the Doctor, who pretends he can speak baby, that young Alfie prefers to be called "Stormaggedon, Dark Lord of All". Good dialogues between Matt Smith and James Corden serve quite well a genuine chemistry between the two. But despite nice comedic moments the story is just a pretext for their reunion: the Doctor takes a job in a department store to investigate on strange power fluctuations and the disappearance of a clerk.

« You're here for a reason, aren't you? You've noticed something and you're investigating. And because it's you it's going to be dangerous and alien. » A "silver rat" and an out of order lift lead the pair to troubles in the form of a Cybermen crashed spaceship beneath the shop. Maybe it's time to give the Cybermen "a rest" since they are reduced to nothing but a walking trivia under Steven Moffat's reign. And who really thought Craig could become Cybersmithy in the clumsy conversion sequence? He can still buy a Cyberman to Stormageddon for Christmas, our children will preserve us from the next invasion.

A department store, really... What's next? A movie/TV studio like in the days of Monty Berman? And of course the penultimate episode of the current series ends with the Manchurian Candidate and the return of the queen of panto villains, Madame Kovarian (Frances Barber). Too bad they couldn't get Joan Collins for the role of this eye-patched Ellie Shaw. Closing Time, what an aptly chosen title for this episode directed by Steve Hughes.

Next Time: The Astronaut's Husband.

lol, I love your title for the next !