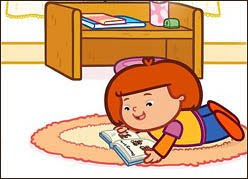 Launched on Irish pubcaster RTÉ last May, Punky is a pre-school animated series about the adventures of a little girl with Down Syndrome. Punky, the title character, lives in the moment and works to solve problems encountered by her friends and family.
Created by Lindsay Jane Sedgwick (1), Punky is the first ever animated TV series in which the main character has Down syndrome. Punky is a six-year-old girl who loves her family, music, dancing and hugs. She enjoys playing with her big brother, Con, and jumping around with her dog Rufus. She also likes helping around the house with her mum and trying to make Cranky, her grandmother, just a little less... cranky.

Punky is voiced by Aimee Richardson (29), who has Down syndrome herself and is a spokesperson and advocate for disability rights (2). Other voice talents are Maureen Ward (Mum), Brad Burke (Con), Paul Tylak (Cranky), Roisin Curran (Mairhead). The 20 x 7-minute series is produced by Gerard O'Rourke for Dublin based Monster Animation & Design in association with RTÉjr. It is written by Andrew Brenner (Humf) and Jason Tammemägi (Fluffy Gardens) is the creative director.

Down Syndrome Ireland provided support and reviewed material during production. Target Entertainment will distribute Punky globally and will donate half their sales commissions to Down Syndrome Education International. Target CEO Alison Rayson's own son has Down Syndrome.

This charming animated series will be launched on the international market at MIP Junior next month.