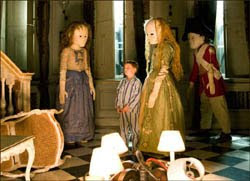 Doctor Who - Night Terrors (Series Six, Episode Nine). « Please save me from the monsters. » Amy and Rory (Karen Gillan and Arthur Darvill) follow the Doctor (Matt Smith) when he receives a distress call from a scared little boy named George (Jamie Oram).
Written by Mark Gatiss and directed by Richard Clark, Night Terrors was moved from the first half of the sixth series to the current second half. Hence the strange lack of preoccupation of Amy and her husband for their missing child Melody/River Song. To swap episodes within a heavy story arc structure can have unexpected side effects. « Today we're answering a cry for help from the scariest place in the universe. » Leadworth under budget cuts? No... "a child's bedroom", says the Doctor.

Little George's bedroom is in a council estate flat where he lives with his parents, Claire and Alex (Emma Cunniffe and Daniel Mays). This council block has barely more inhabitants than Aylesbury Estate in The Fixer and some have escaped from the Overlook Hotel. It has bin issues of an unusual kind. There's also a nasty elevator and a landlord (the always reliable Andy Tiernan) with a big mean dog. Anyway the real problems of George are the mess in his cupboard and some folks in doll suits .

Let's Kill Hitler was the best opener since The Eleventh Hour. Unfortunately Night Terrors doesn't match The Beast Below, with which it shares a couple of elements. Gatiss's episode is an innocuous filler where nothing has a real effect or consequence. No one dies, nobody stays a Peg doll, the surrogate parents can love the alien, and the old lady (Leila Hoffman) awakes in the bins. Genius is so overrated since Torchwood: Miracle Day, two or three classic Twilight Zone episodes as a crash course will suffice for a reminder of what genius is.

« Well I suppose it can't all be planets and history and stuff, Rory. » The production accountant will not beg to differ. Daniel Mays's performance is superb, the supporting cast is excellent and Jamie Oram is very good as George.