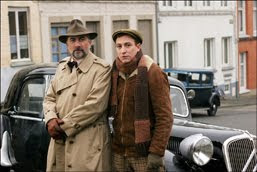 Belgian? No... French. Imagine that Hercule Poirot, the detective created by Agatha Christie, is an epicurian cop and a womanizer living in the 1930s north of France. Imagine also that his assistant is gay and interested in modern investigation techniques.

Set in Brittany in 1939, and filmed there thanks to the support of Région Bretagne, the 4X90-minute episodes were centered on the murder of the rich Simon Le Tescou (played by movie and stage veteran Robert Hossein). They caught an average of 7.3m viewers, which was tempting then to give the detective duo of the case its own collection of TV movies. Even if events in the mini-series actually prevented it.

And so the detectives created by Giafferi and Magellan came back in January 2009 for Les petits meurtres d'Agatha Christie, starting with an adaptation of The ABC Murders set in the north of France prior to Petits meurtres en famille. The series is produced by Sophie Révil for Escazal Films, with France 2, TV5 Monde and CRRAV Nord-Pas-de-Calais (Centre régional de ressources audiovisuelles) and the support of Région Nord-Pas-de-Calais. 10 more episodes followed until now, each attracting between 4m and above 5m viewers.

The stories of Agatha Christie (Ordeal by Innocence, The Moving Finger, Peril at End House, etc...) are cleverly transported in France as a period crime comedy/drama. The ambiance evokes Christie's classics, of course, but also Midsomer Murders and Maigret with Bruno Cremer (1991-2005). Duléry is flamboyant as Larosière, the very French authoritarian, charmer and gourmet supersleuth with some secret emotional cracks. And Colucci is absolutely perfect as his young assistant, the shy and clumsy Emile, amazed by modern policing and gay.

Those two engaging, complex and subtle characters form a fun and effective pair in one of the best French television fiction since the already mentioned Maigret and Nestor Burma (1991-2003). Most regrettably, the two actors announced their departure in january and last week France 2 aired their final episode, adapted from Lord Edgware Dies, in its friday crime drama slot. An adaptation of They Do It With Mirrors will introduce a new duo, Commissaire Laurence (Samuel Labarthe) and reporter Alice Avril (Blandine Bellavoir), in the 1950s.

It will be very hard for them to top Larosière and Lampion, whose era is already a classic. Abroad Les petits meurtres d'Agatha Christie is aired in Finland, Hungary and Japan. The music is by film and TV composer Stéphane Moucha (Das Leben der Anderen) and Romain Segaud designed the great title sequence. Petits meurtres mais grande série.