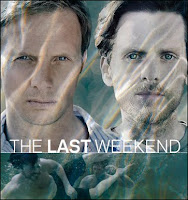 Two unlikely friends, Ian (Shaun Evans) and Ollie (Rupert Penry-Jones), spend a bank holiday weekend at a lovely Suffolk cottage with their respective partners, Em (Claire Keelan) and Daisy (Genevieve O'Reilly). The former is a disillusioned primary school teacher, the latter a successful barrister. « Every year, or at least when we can, Ollie and I have a three event triathlon for money. Which... which matters. » What should be a relaxing four-day break turns bad when competition between the two university buddies and hidden feelings resurface with tragic consequences.

« I don't want you to feel like I'm hiding things from you, but I don't want you missing out either. Because each piece of information matters. » Three months later Ian narrates and comments what happened in and around the country house, but also his student days when the two men met Daisy for the first time. « All truth is subjective. » Ollie has a secret. Why did he tell Ian that he "could murder someone tomorrow"? And who is Milo (Swedish actor Alexander Karim) who joins the couples with his two daughters?

The Last Weekend is a twisted tale of friendship, "love", jealousy and manipulation with welcome shakespearean accents. Facing the always excellent Rupert Penry-Jones as another upper-class lawyer (he's Clive Reader in Silk), Shaun Evans (Endeavour, Martina Cole's The Take) delivers a stunning performance as our guide to this round trip from confusion to tragedy. « Everything's connected, you see. Everything. » The elements spread throughout the three parts lead you to a red colored conclusion but first look who's talking.

The smart cinematography is by the talented Adam Suschitzky. The atmospheric score is by Rob Lane (Hidden, The Suspicions of Mr Whicher). Carnival's Sally Woodward Gentle (Whitechapel) exec produces The Last Weekend, which is distributed globally by NBCUniversal. Christopher Hall (Hidden) is the producer.