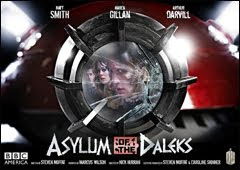 After eight months since The Doctor, The Widow and the Wardrobe (the 2011 Christmas special) and almost one year since the last regular episode, Doctor Who is finally back for its seventh series on BBC One and BBC America. Five episodes in september, this year's Christmas special, and the remaining eight episodes in 2013.

Series six was uneven and often talkative, looking overinvested in terms of production values at some points and the reverse at some others. And sorry but its high concept soap story arc was painful (1). But who cares anyway? As Doctor Who's 50th birthday approaches, Matt Smith, Karen Gillan and Arthur Darvill are more popular than ever. Fans majoritarily adore the work of showrunner Steven Moffat and his writing team. The ratings are great and the brand is commercially at the top globally. It's so global that viewers outside the U.K. get a pre-title sequence with Mrs Pond reassuring us just in case we'd think this is Strictly Come Dancing.

« Hang on a minute, lads, I've got a great idea! » (Charlie Croker, The Italian Job)

No Doctor at the London Olympics opening ceremony? Don't panic. We've been promised "a blockbuster every single week" for this series (2). Each episode is meant to be written like a "movie poster" and have one, which is amusing given the brouhaha around a the possibility of a jump to the big screen. The title sequence has been given a (terrible) makeover and the logo changes according to the theme of the episode. This is the "year of the blockbuster" and it starts with an Asylum of the Daleks packed, we're told, with "every Dalek ever!"


The Doctor is thought dead but the Daleks manage to bring him in front of their parliament, where he's reunited with the future ex-Pond couple because the time lord's deadliest enemies have a most unusual demand. Yes, the rigid pepper pots do have a parliament and even a Prime minister! - Question Time must worth a look. « What do you know of the Dalek asylum? » asks M to 007. The Daleks have a planet where they dump their broken ones (the battle-scarred, the insane, Spike Milligan's "Pakistani Dalek", etc...) (3)

« It never made any sense to me, » comments a lucid Doctor. « Because you'd just kill them. » But they have not only a parliament and a PM, they have also cafés philo where they discuss the beauty of the "divine hatred"(« Perhaps that is why we have never been able to kill you. ») This sudden state of enlightenment doesn't include Georges Bizet apparently. Somewhere on the asylum planet a young woman is listening to Carmen and making soufflés while the crème de la crème of nutter Daleks is about to escape.

The real divine element of Asylum of the Daleks, written by Steven Moffat himself, is the early arrival of Jenna-Louise Coleman, due to appear as the Doctor's new companion at Christmas. There will be no two-parter but we cannot bet for no arc as her introduction augurs another contrived storyline - the "twist" was no Keyser Söze - to replace the Pond soap opera. Moffat's recycling of his own previous ideas has been widely noticed and the episode displays a formidable sense of self-awareness, which culminates with the « Run, you clever boy. And remember » scene.

The Daleks won't remember (oh, lucky them). « Doctor who? » Precisely... On the plus side, director Nick Hurran gives a true cinematic feel to this Asylum of the Daleks and a return of Anamaria Marinca (The Last Enemy) as Darla Von Karlsen, the "Dalek puppet" (surely they have no word for "action figure"), would be interesting. Matt Smith's portrayal of the Doctor remains amazing and Nicholas Briggs does a superb job as the voice of the Daleks.