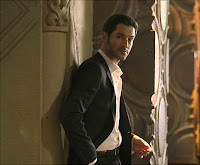 Lucifer Morningstar, the Prince of Darkness, gets bored and abandons Hell to open a nightclub in Los Angeles. When a young woman he knows is murdered in his presence he imposes himself as a consultant to LAPD homicide detective Chloe Decker.

Lucifer is intrigued by Chloe, who's immune to his charm and powers.

Lucifer, which premiered on American network Fox on January 25, is based on a comic book character created by Neil Gaiman, Sam Keith and Mike Dringenberg for DC Comics' Vertigo imprint. The pilot is written by Tom Kapinos (Californication) and directed by Len Wiseman (Sleepy Hollow, Underworld). The premise of this 13 one-hour episode series (pilot included) is basically Death Takes a Holiday as a procedural or The Mentalist with a fantasy twist. But it's great fun mainly because of its star, Welsh actor Tom Ellis (Rush, Miranda) as Lucifer Morningstar.

Ellis does irreverence and dark comedy perfectly, with a posh Brit accent which sometimes makes the devil sound like David Walliams. He gives his character some necessary dose of threat and a bit of melancholy. Most of the humour comes from Lucifer being candid about his identity or making others telling the truth and confessing their hidden desires. He forms an unlikely sleuth duo with Chloe Decker, played by Lauren German. Chloe is the daughter of an actress (Penelope Decker, "Queen of '80s cheeseball sci-fi") and a police officer.

Before being a cop, she tried acting although her short career is only remembered for a movie called Hot Tub High School. Chloe Decker lives with her young daughter Beatrice, nicknamed "Trixie" (Scarlett Estevez). Her ex-husband, Dan (Kevin Alejandro, Nicholas Rodriguez in the original version of the pilot), is a LAPD detective too. Much to his annoyance, Lucifer Morningstar is regularly reminded of his duties by his brother Amenadiel, a dark-winged angel (D.B. Woodside), sent by their father to demand his return to Hell.

Lucifer's demon confidante and bartender Maze (South African born actress Lesley-Anne Brandt) seems to not enjoy Los Angeles as much as him and regrets his old personality. Lucifer discusses his interest and growing feelings for humanity with his very concerned therapist Dr Linda Martin (Rachael Harris). Lucifer is another police procedural but it doesn't take itself too seriously and it's a good thing because the plot of Lucifer, Stay. Good Devil (the second episode) could pass as an episode of Sledge Hammer or Police Squad.