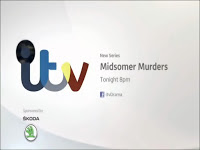 [Spoiler-Free] Businessman and modern art lover Brandon Monkford turns into the macabre centerpiece of his new Sculpture Park when he's found dead during the launch night.

« You know how art imitates life?
- I've heard that rumour.
- Well, this is art imitating death. »

DCI John Barnaby (Neil Dudgeon) and DS Charlie Nelson (Gwilym Lee) talk to  the victim's family. They also investigate amongst residents of the picturesque (aren't they all?) Midsomer village of Angel's Rise opposed to the park, and the artists rejected by Monkford. Series 18 of Midsomer Murders continues with a very good art themed fourth episode written by Jeff Povey (Holby City, Casualty) and directed by Matt Carter (Doctors, Father Brown). For their first gig on the venerable ITV detective drama they both show an appropriate sense of creativity (it's about art, remember) to surprise viewers. The second murder in particular is an instant classic.

« There's gonna be a doctor, a dentist, a guitarist/singer, even an artist.
- I seem to be surrounded by them at the minute. »


John is awakened very early by a phone call from Charlie and prepares to join him and pathologist Dr Kam Karimore (Manjinder Virk) during the opening credits (« I'm missing my beauty sleep as well. ») Sarah Barnaby (Fiona Dolman) reminds her husband that he must give a careers talk at her school. Baby Betty contributes to the art of the episode and Charlie argues with Kam about a dialogue line! David Bamber, Denis Lill, Cherie Lunghi, Saskia Reeves, Adrian Scarborough and Ramon Tikaram are some of the guest stars.