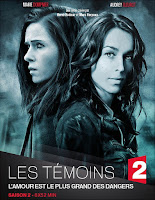 [Spoiler-Free] [Revised May 30, 2017] 15 dead men are found frozen in a stolen bus on a country road of the north of France. The bodies were manicured, their hair done and they were elegantly dressed after their death.

Those men all disappeared three years ago and all loved the same woman at some point. She vanished around the same period... until now. The second series of French crime drama Witnesses (Les Témoins) premiered this week.


Two years after the first series of Les Témoins, police detective Sandra Winckler (Marie Dompnier) and her colleague Justin (Jan Hammenecker) are back for another conundrum written by Hervé Hadmar (who also directs) and Marc Herpoux, the duo behind Signature, Pigalle, la nuit and Les Oubliées. Thierry Lhermitte, who brilliantly escaped the antics of the French Doc Martin with his role as the enigmatic Paul Maisonneuve in the first series, doesn't return. This year, Audrey Fleurot (A French Village, Spiral) co-stars alongside Marie Dompnier as the even more mysterious Catherine Keemer.

Catherine, the common denominator between the 15 frozen victims in the bus, suddenly resurfaces in her car after three years. Totally amnesiac, she's found in the street asking "Il est où?" The case shares similarities with troubling events which occurred years ago. A furnished studio flat, a poem by Auguste Barbier (1805-1882), a woman in a psychiatric hospital since 1979, and a place called "La Colline du Diable" are amongst the first pieces of this promising jigsaw puzzle. Sandra Winckler has a problem with her elder daughter and she chooses to play a dangerous game of cat and mouse. Catherine Keemer has her own child related issue. Like the tagline of this new series says: "Love is the greatest danger".

Aired between March and April 2015 on French pubcaster France 2, the first series of Les Témoins (6 X 52-minute) caught an average of 4.3m viewers. The creation of Hervé Hadmar and Marc Herpoux also raised a huge interest abroad with sales in several territories like Germany, Belgium, Norway, Australia, Poland or the United Kingdom, where Channel 4 aired it as Witnesses. France 2 commissioned a 8-episode second series. In between, Hadmar and Herpoux did the miniseries Beyond the Walls (Au-delà des murs) for Arte. Filming of Witnesses 2 took place between March and August 2016 during 96 days, in the Hauts-de-France region and at the Mont Saint-Michel.

Marie Dompnier, who worked mainly on stage before Les Témoins and won a Golden Fipa award for the role of Sandra Winckler, expands her character with an infinite subtlety. Audrey Fleurot is (of course) excellent and the talented Belgian actor Jan Hammenecker gets more presence as the likeable Justin, a role he first played in Signature. Justin lives with Mélanie (returning actress Florence Bolufer) and he's joined by his teenage son Fabien (Gwendal Marimoutou), who lived with his mother in La Réunion until then. They celebrate Christmas in March and Justin has a funny scene with a fridge.

The writers definitely know how to build an effective and gripping mystery. Hervé Hadmar's always stylish direction is impressively atmospheric. The locations are incredible. There's a small (clever) change at the end of the title sequence, still accompanied by Tricky's haunting We don't die (2013). Witnesses is produced by Cinétévé with France Télévisions and Pictanovo (Les petits meurtres d'Agatha Christie), with the support of Région Hauts-de-France and the participation of SBS-TV Australia.

Fabienne Servan-Schreiber and Jean-Pierre Fayer are the producers. Jean-Marc Abbou is the production manager. Music composed by Éric Demarsan. Jean-Max Bernard is the cinematographer. Distributed by Newen Distribution (Spiral). Koba Films will release the 3-disc DVD of this second series next month.