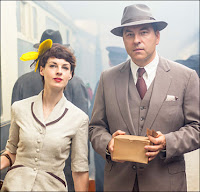 Partners in Crime, the 2015 BBC series based on the Beresford series of books by Agatha Christie, arrives on French channel D8 at the end of the month as Les petits crimes d'Agatha Christie. [Update - April 14, 2016] Oh dear! Someone has murdered the French title of Partners in Crime. Now it will be Associés contre le crime.

Two years ago the BBC announced that they would be the new TV home of English crime writer Agatha Christie in the UK for the 125th anniversary of her birth, thanks to a major deal with her estate. Their first two commissions were the latest adaptation of And Then There Were None and Partners in Crime.

The latter is based on a collection of short stories written by Christie between 1922 and 1973 and featuring crime-fighting duo Tommy and Tuppence Beresford. Francesca Annis and James Warwick played the Beresfords in a 1983-1984 series for LWT. In France, André Dussollier and Catherine Frot were the sleuth couple in three movies from 2005 to 2012. The comedian and actor David Walliams and Jessica Raine (Call The Midwife) star in this six-part version adapted from The Secret Adversary and N or M?.

In 1952, husband and wife Tommy and Tuppence Beresford stumble into the shadowy world of espionage because of a strange encounter on a Paris train and Tuppence's curiosity. They're enlisted by Tommy's uncle, Major Anthony Carter (James Fleet), the head of a secretive Military Intelligence department. Tommy and Tuppence are assisted by Albert Pemberton (Matthew Steer), a chemistry teacher and part-time agent for Carter. David Walliams pleasantly surprises out of his comfort zone. Jessica Raine is excellent as usual.

Partners in Crime is charming, fun and gorgeously produced. Most regrettably, BBC One aired it in July/August 2015 and then axed it. In France, where Agatha Christie is very popular, the series will premiere on D8 on April 30. "Les petits crimes d'Agatha Christie" is an obvious echo to France 2's hit Les petits meurtres d'Agatha Christie, adapted from the author's work with French detectives and aired since 2009. Too obvious?  So in French, Partners in Crime becomes Associés contre le crime. It's also the title of the second French collection of the Beresford short stories, one of the French titles of the LWT series and the title of the third Dussolier/Frot movie. Partners in Crime is produced by Endor Productions and Agatha Christie Productions for the BBC. It is distributed by All3Media.