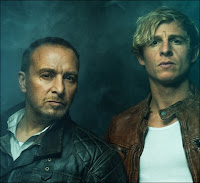 Although the show started in 1996, Cobra, übernehmen Sie!, actually opens its 39th season because Alarm für Cobra 11 is aired in two halves during autumn and spring.

Written by Frank Koopmann, Janet Pfitzer & Roland Heep and directed by Franco Tozza, the "Pilotfilm" (as these feature-length openers are called) marks officially the 20th anniversary of the series. The title of this very special episode is a nod to Kobra, übernehmen Sie, the German title of Mission: Impossible (the 1966-1973 TV series). Cobra, übernehmen sie! introduces the new partner of veteran motorway cop Semir Gerkhan (Erdogan Atalay): Paul Renner, played by Daniel Roesner. Before this episode, the actor appeared twice in Cobra 11 (in 2010 and 2011) as another character, Andreas "Tacho" Tachinski, alongside Axel Stein as Kai "Turbo" Schröder. In 2013, action concept and RTL tried to give the duo their spinoff series with a terrible pilot called Turbo & Tacho.

Paul Renner first met Semir long before he joined the police forces, when he was a young boy. After a "flashback" scene with Erdogan Atalay and his 1996 hairdo, we literally jump into a "routine mission" of Gerkhan and the (not so) newcomer. Of course, in Alarm für Cobra 11 "routine" means chaos on the motorway. Someone who speaks French wants to recover a hard drive at any price. While Semir worries for his health, his colleagues and his ex-boss Anna Engelhardt (Charlotte Schwab) celebrate his 20 years in the Kripo Autobahn. Some tenacious Russian agents are after Gideon Link (Thomas Heinze), a high-tech mogul and friend of forensic police whiz Hartmut (Niels Kurvin) who says he who wants to make the world a better place.

Krüger (Katja Woywood) and Dorn (Katrin Heß) do their own take on the Charlie's Angels movies and secretary Susanne (Daniela Wutte) is going to have her baby. Cobra 11 returns to pure bonkers after the "darker" Alex Brandt era (1) and goes James Bond once again, thanks to a villain who wants to Hugo Drax the planet on a budget. Daniel Roesner's new character is one of the pleasant surprises of the episode. Another one is the excellent French actor Jean-Yves Berteloot as Dufourquet. The expiration date of Alarm für Cobra 11 - Die Autobahn Polizeï exploded a while ago but Hermann Joha and the production team sure know how to organize a birthday party.