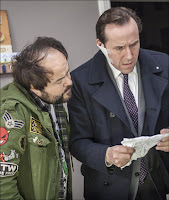 Back to Brighton from another work trip, Murray learns that his beloved wife Bex left him on the day of her 40th birthday. Too bad for the surprise birthday party he has arranged...

The bottom line: What Richard Poole did next.

Writers Mark Bussell and Justin Sbresni and comedian/actor Ben Miller, who gave us The Worst Week Of My Life (2004-2006), team up again for I Want My Wife Back. This six-part BBC One sitcom is produced by Mainstreet Pictures, the indie prodco of former ITV drama execs Laura Mackie and Sally Haynes, with Bussell and Sbresni's Busby Productions.

Ben Miller is Murray, the hapless husband of Bex, played by Caroline Catz (DCI Banks, Doc Martin). I Want My Wife Back is supposed to be a "romantic comedy" though this first episode is neither funny nor humourous. Murray looks like a thinly disguised version of Miller's DI Richard Poole in Death in Paradise. Unfortunately, there's no trace of the extraordinary sense of social satire and comedic pace usually displayed by the actor in things like The Armstrong and Miller Show.

I was disappointed by the first two episodes, probably because it was advertised as a comedy. A chuckle here and there but it's no Fawlty Towers. Acting befuddled and not having the courage to speak shouldn't be passed off as comedy. The actors are giving it their best but the writing and pace of the directing are subpar. Cheers.

Sorry, an addition to my previous comment. I've watched the first two episodes and can't recall Murray telling his wife he loves her. Perhaps I missed it? If I wanted my wife back it's the first thing I'd tell her. At the airport he's sending taxis away when he should be professing his love and asking for another chance. I don't understand these writers. The scenes just don't feel real.

Just watched episode 3 and this is certainly not a rom-com. There's no romance, no comedy. Murray refuses to speak up during misunderstandings. Murray refuses to deal with the annoying Grant. Murray still hasn't told Bex that he loves her. Will Murray get his wife back? Who cares? Poor Caroline Catz. First the horrible Doc Martin and now Murray for a TV husband. Are all British men this cold to their wives?