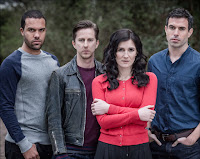 [Spoiler-Free] When they were 12 years old, friends Mark, Pru, Danny and Slade were out together in the forest with Mark’s five-year-old brother Jesse. Bothered by the kid, they asked him to go home alone.

Jesse was never seen again. 20 years later, Danny is a police officer on a murder case. The forensic report gives him quite a shock: Jesse's DNA has been found on the crime scene.

The Five is a 10-part suspense/thriller drama created by American bestselling mystery writer Harlan Coben for British channel Sky 1 and written by English screenwriter Danny Brocklehurst (The Driver). It's Coben's first original TV series. Last year, the French 6-episode adaptation of his novel No Second Chance (Une chance de trop), triumphed on private channel TF1. The Five is produced by RED Production Company (Happy Valley, Scott and Bailey), which was founded by Nicola Schindler in 1998. It is set in the fictional English town of Westbridge and filmed in Liverpool.

Copper Danny, played by O-T Fagbenle (luckier than with The Interceptor) warns his friends Mark (Welsh actor Tom Cullen) and Slade (Lee Ingleby, also in The A Word) about the DNA results. Mark has become an inner city legal aid lawyer. Slade runs a city shelter that houses runaways and victims of domestic violence. The trio contacts Pru (Sarah Solemani), now a doctor married to an American businessman. Mark interrogates Jákob Marosi (the great Rade Sherbedgia), a convicted child killer who admitted the murder of Jesse but the body wasn't found.

Mark's parents, Julie and Alan (Geraldine James and Michael Maloney), try to cope with the news. A young woman who disappeared 5 years ago suddenly resurfaces. The phone of the murder victim leads Danny and his colleague Ally (Hannah Arterton) to a suspect who might be Jesse. Someone uses a silenced gun before throwing it into the lake. A music producer has a very sinister house... Harlan Coben's touch is recognizable. He even considered the idea for a novel. Nevertheless, there's no need to be a fan of his books to enjoy this gripping drama.

Sky 1 airs two back-to-back episodes of The Five every friday (from April 15). The first couple of hours give you exactly what you expect of the genre: a plot effective enough to divert attention from its possible flaws, multi-layered characters, questions and of course the mandatory twists and turns. The Five is masterfully directed by Mark Tonderai. Produced by Karen Lewis. Richard Fee is the story producer. Nicola Schindler, Harlan Coben and Danny Brocklehurst exec produce. Cameron Roach is the executive producer for Sky.

Music composed by Michael Jennings. Tico Poulakakis is the cinematographer. The cast also includes Honeysuckle Weeks as Laura and the amazing Don Warrington (Death in Paradise) as Danny's father Ray. The Five is distributed by Studiocanal, which owns Red Production Company. The series will start on Canal+ on April 28. Harlan Coben recently launched his own production company, Final Twist Productions, in partnership with Nicola Schindler. Studiocanal will distribute its original content.