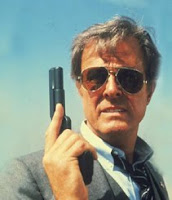 [6.50 - French Time] American actor, scriptwriter and director Robert Culp has died yesterday in Hollywood, he was 79.

Culp caught the attention of US television viewers, early in what would become a rich and enduring career, with the Western series Trackdown (1957-1959). In an episode, Culp's character teamed up with a bounty hunter named Josh Randall. Randall, played by Steve McQueen, got his own spinoff (Wanted: Dead or Alive).

McQueen became an international superstar but Robert Culp contributed to write an important chapter of American TV History with I Spy (1965-1968), where he played Kelly Robinson. Robinson's partner Alexander Scott - played by comedian Bill Cosby - was black, at a time when the idea of an Afro-American president in the White House was not even a wildest dream. Not only I Spy was a groundbreaking show for this reason but it was also a very good show with realistic scripts - some of them written by Culp himself (including episode 1), an ultra cool theme by Earle Hagen and even exotic locations: Acapulco, Hong Kong, Madrid, etc.

Particularly popular in Quebec (it was dubbed in French-speaking language there), I Spy arrived in France only in 1987 and French audiences actually know Culp for his guest appearances in Columbo as the murderer. Some years later he brought back elegantly this popular archetypal figure in the fourth episode of Jake and the Fatman (1987-1992). Culp was so impressive in it that the character came back for revenge in 1991.

French TV viewers virtually ignore another major credit in Robert Culp's resume: The Greatest American Hero (1981-1986), because only the pilot was shown here. In this show William Katt was Ralph Hinkley, a teacher who's given a red superhero suit by aliens, and Culp was FBI agent Bill Maxwell.

His other television credits include roles in three classic Outer Limits episodes, and in series or miniseries like The Man from UNCLE, The Name of the Game, A man called Sloane, or The Key to Rebecca. Culp also worked in many movies like the famous Bob & Carol & Ted & Alice (1969), and directed the effective detective thriller Hickey & Boggs (1972), where he co-starred with Bill Cosby again.
Publié par Thierry Attard à l'adresse 06:54