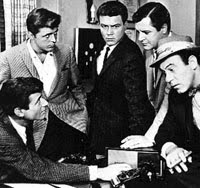 Developed from a character created by Roy Huggins (The Fugitive) 77 Sunset Strip ran from 1958 to 1964 on ABC and was produced by Warner Brothers. Efrem Zimbalist, Jr and Roger Smith were two Los Angeles private eyes who had an office at 77 Sunset Strip, near a club where Gerald "Kookie" Kookson III (played by Edd Byrnes) worked as a valet parking attendant. Kookie often helped the detectives on their cases.

As Mike Fleming recalls in his piece for Deadline, 77 Sunset Strip was in its time the epitome of cool. The show is a classic - like its catchy theme song - and Fleming reports that the movie will be directed by Greg Berlanti.

If it becomes a box office hit be prepared for a Hawaiian Eye feature film with Taylor Lautner as Tom Lopaka and for a movie remake of Crime Story by Michael Mann. I can't wait.

My name is Sam Tyler. I had an accident, and I woke up in...