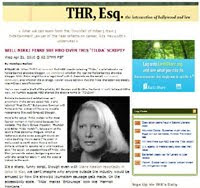 [17.48 - French Time] Legal affairs blog THR, Esq. has read a first draft of the script for the pilot of Tilda, a HBO half-hour comedy series from Oscar-winning writer/director Bill Condon (Gods and Monsters, Dreamgirls) and Cynthia Mort (Tell me you love me).

Tilda is about "a powerful female online showbiz journalist with a no-holds-barred style". This description is considered by many in Hollywoodland as a portrait of our dear She Who Must Be Read, aka Nikki Finke, founder and Editor in Chief of Deadline.com.

According to Michael Ausiello of EW, Diane Keaton is in talks to play Tilda (http://ausiellofiles.ew.com/2010/04/12/diane-keaton-hbo-tilda/). Tilda Watski (Watski?!) is the powerful founder and editor of The Daily Circus, an influent Hollywood website, explains THR, Esq.'s Matthew Belloni in his article. And the common idea among many Entertainment websites is that Nikki Finke could sue HBO over this new sitcom should the Tilda character too closely resembles her.

But the excellent Nellie Andreeva, who first reported about Tilda in THR (and works for Nikki now), pointed out that Nikki Finke isn't the only female "Hollywood blogger", so the character could be a composite. In the sitcom Murphy Brown (1988-1998), Candice Bergen starred as a strong, uncompromising reporter based on several star female journalists of the time.

The worst Nikki, and us, could fear about Tilda is "Veronica's Closet meets Entourage" but Belloni says the script is "sharp and funny", so Condon and Mort could well deliver the 21st century Murphy Brown. And they have already free publicity, plus the guarantee that all Hollywood will watch their show.

Tilda Watski?! Could Nikki could sue for that?