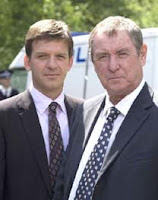 Programming director Laurent Corteel told Marie-Agnes Bruneau that France 3's European drama slot in Sunday primetime had not performed particularly well. ITV's Midsomer Murders did well last fall but its share eroded and the channel ran out of episodes. Another UK crime drama, A Touch of Frost, was tried recently with its 14th series but "did not really work out".

In the past France 3 even aired new episodes of Taggart after a long absence of the Scottish drama on French TV but it didn't last and the crime series never came back. Interestingly, Corteel also explained to C21 that European drama won't disappear from the channel but it will probably be scheduled in the second part of the evening, or in daytime.

We'll observe how it could affect a drama like Midsomer Murders, which relies on international sales to the point that they will carefully replace DCI Tom Barnaby by his cousin DCI John Barnaby (Neil Dudgeon, introduced on ITV1 in a February episode) when John Nettles retires at the end of series 13. Because in many country the show's title bears the name of its character (in France it's called Inspecteur Barnaby).

The Sunday primetime slot on France 3 was also the home of Lewis.

Oh well, it will be slightly easier for Olivier and I to watch the British series, then, since the slot they use now clashes with Matthieu going to bed... ^^;

Still, I did not thiamine France TV would dare what TF1 did with mitigated success... aka "French" clones...