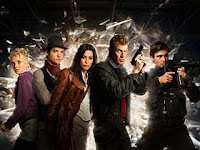 « Rule number three, I can't bring people back from the dead. It's not a pretty picture. I don't like doing it! » (Genie in Aladdin)

Neil Wilkes announces on Digital Spy that Primeval has been recommissioned for two more series under a new co-production deal between ITV and UKTV, three months after ITV axed the series! 13 new episodes will be split into series 4 and 5 (http://www.digitalspy.co.uk/cult/a179623/primeval-recommissioned-for-two-series.html). Series 4 arrives in early 2011.

Considering the quality level of series 3 the show should be renamed Waking the Dead...