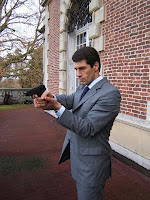 SPECTRE is back in the game and for James Bond the stakes are personal.

Normally your humble servant doesn't give a damn about that kind of material and in fact I've missed the bus of its release in 2007 but, as you know, I'm an avid reader of Quantum of Bond - one of the blogs of French cinema journalist and author Philippe Lombard. And last week he has written a piece about that gem: Shamelady. Shamelady is not your average "fan film". It's a true short movie with a lot of work, incredible production values for such a format, a surprising showcase of talent at different levels and an elegant tribute to 007.

When James Bond (Serge Rotelli) is sent to France in order to buy information about a terrorist organization to the shadowy Mangin (Philippe Lombard... Yes, the one named above), the transaction turns into a shoot'em up and an unexpected ghost from 007's past resurfaces: SPECTRE. James must neutralize the sinister industrialist Jacques Descarpes (Luc Le Clech), number 2 of SPECTRE, in a casino game at the beautiful seaside resort of Luc-sur-mer. He is assisted for this mission by Joan Jansen (Alice Suzan), an agent from MI6, but he's intrigued by the mysterious Anna Raykova (Irina Bogomolova).

The short film has it all: a professional direction, a script which is a treat for 007 enthusiasts, great locations, an Aston Martin DB5, classy wardrobe, an impressive "Binderian" credit sequence, etc. Of course Shamelady has some minor defects but the result is astonishing for a short, almost like an answer to this question puzzling many Bond fans: what if James Bond was a television series? If 007 was a TV show Shamelady would match the production standards of an ITC series (The Persuaders, not Jason King).

Constellation Studios regularly produces pleasant shorts such as the "Audiardesque" Picnic (2009) and Bluff (2009). Both with the talented gang behind Shamelady, including our fellow journalist Philippe Lombard - at ease in front of a camera. Your humble servant couldn't do that, unless the guys make a Nero Wolfe short.