NO S**T, SHERLOCK... AMANDA IS BACK IN MELROSE PLACE 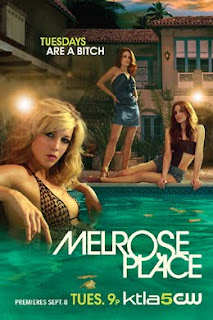 The CW network has confirmed that Heather Locklear will return as the iconic Amanda Woodward in the 2009 version of Melrose Place.

In May I wrote: « So if the new Melrose is as camp as the original the hopes are high and if the all "Young, bold, beautiful and restless" - hey, it's the CW - cast fails they can bring back iconic Heather Locklear to save the show ».

The original Melrose Place ran from 1992 to 1999 on Fox and was a spin-off of the original Beverly Hills, 90210. Both were creations of Darren Star and were produced by television mogul Aaron Spelling, who made a brilliant comeback with 90210 after the cancellation of the emblematic Dynasty in 1989. After a bland first season, Spelling dropped two Melrose cast members, called Heather Locklear (T.J. Hooker, Dynasty) to play the über bitch Amanda and transformed the show into a steamy primetime supersoap with the most improbable intrigues.

And it worked beyond expectations, the original Melrose Place is remembered by its fans - count me in - as the ultimate "guilty pleasure" (why "guilty"? I love junk food anyway) in the History of Television. Personal favourite scene: when Kimberly Shaw (Marcia Cross before Desperate Housewives) blows up the apartment complex of the 1416, Melrose Place - best TV line ever: « It's not what it looks like... It's worse ».

Actually the return of Amanda in the new Melrose Place is absolutely not a surprise. Most of the original cast is due to appear and everybody, from the producers to the network and fans of the original, was wishing that long before the disappointing ratings of the 2009 show. The real big coup would be a guest appearance of Marcia Cross but she's under contract with Desperate.

Imagine, Bree Van de Kamp blows up Wisteria Lane (« It's not what it should look like... It's worse ») and Cross is free to leave the impro league to go back where she belongs. Welcome back, Cutter... Humble tips to the Powers that be: Melrose Place is not Gossip Girl or 90210 (what's next on CW? Cruel Intentions 2009?) Second tip: if the ratings really sink what about a crossover with Chuck? The reluctant spy is a neighbour, after all.
Publié par Thierry Attard à l'adresse 06:53