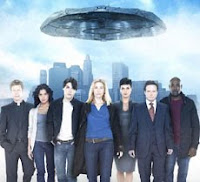 Every lucid observer and specialist has the notion that the 2009-2010 Primetime network season has all the ingredients to become the worst season in many, many years. But as Nikki Finke would say, be afraid, be very afraid.

Right after the announcement of the first casualty of the fall season, CW's The Beautiful Life (http://www.deadline.com/hollywood/cw-cancels-the-beautiful-life/), comes the news that the new V without Kenneth Johnson, creator of the original mini-series in the 1980s, will go on hiatus after only four episodes (http://www.digitalspy.co.uk/cult/a179211/v-to-go-on-hiatus-after-four-episodes.html). The show, which premieres on ABC in November is meant to come back on March after the hiatus. But rumours declare the 2009 version of V dead.

This happens after a temporary "creative hiatus" and the fact that producers of the "reboot" were considering the appearances of actors from the original version (or maybe they could call Heather Locklear). And the promo shown this week didn't help to convince your humble servant of the interest of this "reinvention" of one of the greatest chapter in the History of US television.