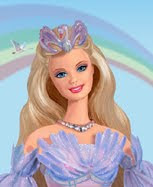 [7.40 AM - French Time] In case you, dear loyal readers, ask yourselves why there's not so much cinema covered in this humble blog these days, the following news may give you a notion why.

According to Michael Fleming in Variety, Mattel's famous Barbie doll will soon have her live action feature film (http://weblogs.variety.com/bfdealmemo/2009/09/u-turns-barbie-into-movie-star.html). A Mattel's Masters of the Universe live action movie is in the pipeline, there is a recurring rumour (joke?) about a Viewmaster movie, and majors are scanning every toy and game franchises to morph them into blockbusters. No doubt that our dear Canadian friend Furious D will not have to wait too long for his awaited adaptation of Hungry Hungry Hippos by Lars von Trier (http://dknowsall.blogspot.com/2009/05/very-important-mission.html).

Laurence Mark (Julie & Julia) will produce for Universal. The idea is that a live action version is a logical step after 16 (rather well-made) animated direct-to-video movies but is it really necessary? Honestly? Nah, seriously? Like if Beverly Hills Chihuahua was not enough.

To be perfectly fair I'm not in the targeted demographic (laughs). But it must be a dream, soon I'll wake up and see Mr Potato Head saying to me "Good Morning" like Patrick Duffy in that infamous Dallas episode.