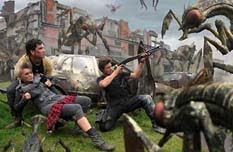 « Open the door, get on the floor. Everybody walk the dinosaur » (Was Not Was)

Speaking at the launch of the ambitious stripped drama Collision (due to be shown this autumn on ITV1) Peter Fincham - ITV director of television - said the recession meant broadcasters need to find creative solutions and “box clever and cut our cloth in different ways" - reports Kate McMahon on Broadcast. ITV hopes to follow the resurrection of Primeval with more innovative drama funding deals in order to optimize its reduced budget (http://www.broadcastnow.co.uk/news/commissioning/fincham-drama-deals-could-be-way-forward/5006271.article).

An unexpected deal resurrects Impossible Pictures' Primeval for 13 new episodes split into series 4 and series 5 for a return of the show in 2011. BBC Worldwide (distributor of the show and broadcaster in the US through BBC America) becomes the largest co-production partner. German private channel ProSieben, historic co-producer, is present more than ever: the popularity of the show in Germany has been decisive in this return from the dead. And UKTV enters as a first-time investor and gets a first-run of series 5.

ITV recommissions Primeval, three months after axing the show because of financial motives and the wish to focus on 9PM drama. U-turn? Er, not quite because in fact BBC Worldwide appears as the winner of this resurrection: Primeval is one of its leading brands, one its most successful drama exports - sold to over 45 countries including Australia, America, Singapore and South Korea. The corporation releases the show on DVD through 2 Entertain and Primeval is a major hit on BBC America - taking on a full co-production credit for the first time with series 4. Ironically, remember the costly Primeval emerged in 2007 as a rival of BBC's Doctor Who.

Co-creator of the show, Adrian Hodges is back as showrunner. Primeval moves to Dublin to contain the costs within the huge standards of the budget and special effects but the cast returns (Laila Rouass included?) And Impossible Pictures clearly wants to transform the UK series into a franchise. Tim Haines, the other mastermind of the show, recently told Digital Spy that the contracts for the Warner Brothers feature film version are about to be signed and that they are in negociations with Canadian partners for a US spin off series. According to Haines an animated series - Dublin, The Last Dinosaur? - should see the light too (http://www.digitalspy.co.uk/tv/a179686/primeval-boss-talks-renewal-future.html).

Now let's hope that ITV will commission a series 3 of The Fixer (distributed by BBC Worldwide) and a new series of Kingdom. By the way... if a show like Primeval can be resurrected after an abysmal series 3, where the hero and one major character die and its "mythology" explodes, then an unsung marvel like Five's Minder reinvention should easily be brought back. Provided you can sell Archie Dailey action figures or make a Reality TV companion show a la Real Hustle called Archie Dailey's Real Deals.

So, Primeval returns. In the 1970s someone believed a second season of Space: 1999 was a damn good idea.
Publié par Thierry Attard à l'adresse 19:02