ANOTHER ONE BITES THE DUST 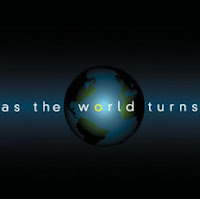 [18.36 -French Time] There was no "performance art" in this one. CBS cancels another soap opera, three months after Guiding Light.

This time it's As the world turns, created in 1956, and its final episode will be aired in september 2010. As Dan J. Kroll of Soap Central aptly remarks, the end of As the World Turns will mark the exit of Procter & Gamble from the world of soap operas, « the very industry it helped to create ».

NBC's Days of our lives is the only soap with more viewers than last year. Stefano DiMera, the resident archivillain of Salem, played so exquisitely by Joseph Mascolo, is really a very powerful man.