AN ENGLISHMAN IN NEW YORK (ITV1) 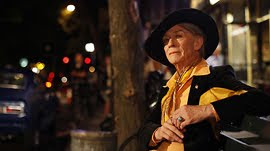 Tonight (at last!) on ITV1, John Hurt reprises the role of author, raconteur, aphorist and gay icon Quentin Crisp in An Englishman in New York. 33 years after his magnificent interpretation in this essential piece of television titled The Naked Civil Servant, directed by Jack Gold.

The original 1975 made-for-TV movie, about the youth of Quentin Crisp (1908-1999) in conservative England of the first half of the 20th century, was adapted by Philip Mackie from Crisp's autobiography and produced by Verity Lambert for Thames Television. It is righftfully considered as a classic and the sequel is awaited with the highest expectations.

An Englishman in New York, written by Brian Fillis and directed by Richard Laxton, picks up where The Naked Civil Servant left off and covers the second part of the life of Crisp, in America. Cynthia Nixon (Sex and The City) and Swoosie Kurtz are in the cast.

This Leopardrama production for ITV1 is actually on the shelves of ITV since one year (http://www.guardian.co.uk/tv-and-radio/2009/dec/23/christmas-tv-schedules-drama-reality) and will face the remake of The Day of the Triffids on BBC One, which is rather unfortunate even if your humble servant has far far less expectations about Triffids 2009.

In 1987, Quentin Crisp inspired to Sting his famous An Englishman in New York, one of the most beautiful songs of the artist (http://www.crisperanto.org/recordings/sting.html). Like The Naked Civil Servant, the song celebrates a man whose life was an ode to the importance of being Oneself.

Great review of this wonderful film by Frank Collins (http://cathoderaytube.blogspot.com/2009/12/englishman-in-new-york-review.html). I was looking forward to read it.

Thanks Thierry for the links to the review. Glad you enjoyed that. I thought it was a wonderful film and certainly the best thing on British television over the holiday period.

If only ITV would commission more films of this quality!