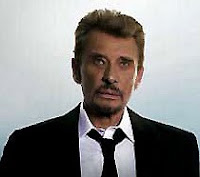 Right in the middle of a political debate about France's Identité nationale (National Identity - i.e. What makes a French), the main topic of French media outlets these days is not the upcoming regional elections, the recession, or climate change but the health of Johnny Hallyday.

Rocker and actor Johnny Hallyday (born Jean-Philippe Smet), 66 years old, is the French equivalent in notoriety of Elvis Presley or even Michael Jackson. He has sold million of records and performed in front of million of fans in stadiums since the sixties. Hallyday is a true Pop culture icon in France: he has a puppet in the always popular Guignols de l'Info (the satirical show aired by Canal Plus) and his weddings or his fiscal localization choices are the talk of main street and among favorite stories of French newspapers or tabloids.

Johnny Hallyday is at Cedars-Sinai Medical Center in Los Angeles since a few days. He has been placed into a medically induced coma to assist his recovery from back surgery in L.A., after complications from a previous operation in France to relieve a herniated disc. Family and friends are now around the rock legend in California and last friday, the French doctor who practiced the original surgery in Paris was attacked by two masked men.

Whether you like the character or not (your humble servant is personally indifferent to the singer or to the public figure) his enduring career as a rock star can only inspire respect. Johnny Hallyday is probably the only remaining superstar of France's music industry since the death of singer Claude François in 1978.

On the opposite, his acting career leaves the impression of a missed opportunity. After some minor films made to cash on the singer and an Eurowestern in the sixties, Hallyday had to wait the eighties when Jean-Luc Godard and Costa-Gavras transcended the singer to make him a true actor, respectively in Détective (1985) and Conseil de famille (1986, remade in the US as Family Business).

In 1989 Americanophile Johnny Hallyday became maverick cop David Lansky in a namesake TV series for French public television service. Ahead of its time with its attempt to match US production, this rather enjoyable show lasted only one season. Unfortunately the rest of Hallyday's filmography is of no cinephilic interest except the wonderful Jean-Philippe (2006), a "Twilight Zonesque" surreal comedy where he played his own self in an alternate reality where the rock star Hallyday doesn't exist.

Johnny Hallyday was meant to go on his farewell tour in January 2010 but French newspapers are asking if his health will allow him to do so, with all the consequences that an interruption could have regarding the business and contractual aspects of this tour. The health status of the artist is not ignored in the anglo-saxon world, even famous celebrity blogger Perez Hilton - who keeps an eye on France (he's the N°1 supporter of French singer Sliimy) - has written a piece about "the French Elvis".