THE SMAÏN AND ROZON SHOW 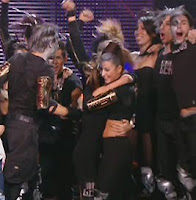 12 semi-finalists divided in two groups of 6. First group: Les Echos-Liés (Dance group), Michaël (Speed painting), Isabelle (Dance), Christèle and her dog, Agnieszka (Singer) and Batuc'Ados (Dance group). In each group the candidate who receives the highest votes from viewers is automatically qualified, and the jury must choose the other between the second and the third chosen by viewers. A candidate is "saved" by the judges at the end of the episode.

In a GT all the fun is in the audition process. No candidate really tried to set the bar higher than during the audtions except magician Mohamed Cheddadi (why the ventriloquist didn't confirm his audition is a mystery) and no surprise in this first semi-final: Isabelle got three buzzes, and the finalists are two dance groups - Les Echos-Liés and So United Crew (at least Les Echos-Liés distinguish themselves with humor) - and two singers, Agnieszka and Léa. No Actors Studio either when the jury had to choose between Agnieszka and Christèle: « What a Cornelian choice » sighed Valérie Stroh. Idem for the choice between Simon and Léa (« It's a very difficult choice » regretted Gilbert Rozon!) Yeah, right...

« The show is not here [within the jury], the show is there [on stage] » said the humorist, partly aknowledging what we already knew: the true stars of a Cowell show are the judges and this year Gilbert Rozon and Smaïn brilliantly steal the show ( « You always agree with me but you can't admit it » said Rozon). When told that The X Factor (another entry from Simon Cowell) 2009 edition had been all centered around her, judge Dannii Minogue answered: « What a shock to hear you say that! I always wish it was about the contestants, but I guess The X Factor is as much a soap opera about the judges as well » (http://www.digitalspy.co.uk/xfactor/news/a191679/minogue-simon-blew-real-competition.html).

Mohamed is the contestant saved by the jury.