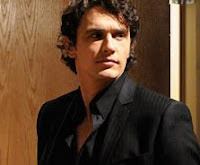 When ABC announced in october that Golden Globe winner James Franco, yes the same James Franco who played in three Spider-Man movies, Pinneaple Express and Milk, would play on a short-term basis in the venerable soap opera General Hospital, many commentators expressed their perplexity.

According to Tate Online, performance art is an art "in which the medium is the artist's own body and the artwork takes the form of actions performed by the artist" (http://www.tate.org.uk/collections/glossary/definition.jsp?entryId=218). The actor explains his artistic step in his WSJ piece: « I disrupted the audience's suspension of disbelief, because no matter how far I got into the character, I was going to be perceived as something that doesn't belong to the incredibly stylized world of soap operas. Everyone watching would see an actor they recognized, a real person in a made-up world ».

The daytime drama genre is living tough times since a couple of years: ratings decline, budgets and casts shrink. Some soaps died this year (Guiding Light) and some may die next year or in a two-year time. Soap opera actors are among the hardest working people in the industry and the talent of many of them has been rewarded by an enduring loyalty from their fans that some A-Listers would not dare to hope in their wildest dreams.

Most soap opera actors are consumed professionals. With character actors and the rare actors who truly deserve to be called "stars" they are the nobility of those who practice their art on screen: the art of acting. When respected veteran actor Eric Braeden (known for his role of Victor Newman in Y&R) appeared in James Cameron's Titanic (1997) he was not doing "performance art". He was doing his job.