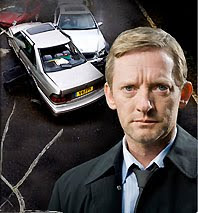 Collision, the ITV1 high profile five-part serial created by Anthony Horowitz (Crime Traveller, Midsomer Murders, Foyle's War), starts tonight and will be shown on five consecutive nights - like what the BBC did for Torchwood: Children of Earth.

Shot on 10 weeks on 120 locations with a 73-person cast (among which Phil Davis and Lenora Crichlow), the five episodes of Collision are directed by Marc Evans. This production Greenlit (http://www.greenlit.co.uk/collision.html) is actually Peter Fincham’s first new independent drama commission, with director of drama Laura Mackie, since joining ITV as director of television.

After the magnificent Murderland, with the great Robbie Coltrane, it's really good to see ITV playing again on a field which made the reputation of quality of British TV all over the world. We'll see if the five nights stripped programming inspired by the Torchwood miniseries (1) will not ruin the huge potential of Collision. The widely popular Torchwood is an extension of the profitable Doctor Who franchise and its series three (reduced to an event miniseries format) was frantically awaited worldwide.