YOU WANT THIS CHAIR? HAVE A SEAT... 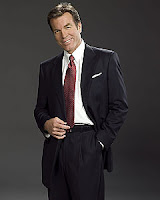 Your humble servant, like Master Chiun, is a big fan of "Beautiful dramas" and Entertainment Weekly published yesterday an excellent interview of Peter Bergman, who will soon celebrate his 20th year playing Jack Abbott on CBS's The Young and the Restless.

Peter Bergman tells many interesting things, about replacing Terry Lester, the evolution of Jack, the future of the Soap Opera genre, or about when the legendary Eric Braeden (Victor "Mr. Mustache" Newman) recently almost left Y&R.

Email ThisBlogThis!Share to TwitterShare to FacebookShare to Pinterest
Libellés : Peter Bergman, Soaps, The Young and the Restless