WHO IS NUMBER ONE? 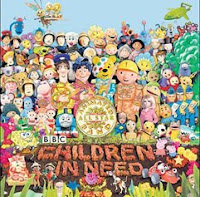 Peter Kay's Animated All Star Band: The Official BBC Children In Need Medley is number one in the UK singles chart.

Comedian Peter Kay, who entered in both music and television History in 2005 for Comic Relief with his cult video cover of Tony Christie's Is this the way to Amarillo, shows his magic again (he should be given a Knighthood) with the most beautiful music video ever done.

Two years of preparation for this video shot in the studios of Chapman Entertainment (Fifi and the Flowertots, Roary the Racing Car) with the original voices of the 100 characters - Peter Kay is the voice of Big Chris in Roary and Jane Horrocks is the voice of Fifi (http://www.bbc.co.uk/pudsey/news/news201109.shtml).

While we're in a rare incursion into the music biz, the debut album of Susan Boyle - revealed by Britain's Got Talent, is number one in the UK albums chart.