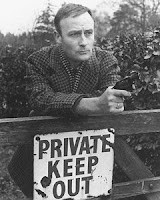 I've just read the sad news on Digital Spy: British actor Edward Woodward has died at the age of 79.

Edward Woodward was, for many viewers, the ultimate incarnation of the realistic cynical and sometimes melancholic le carré-esque television spy. His magnificent interpretation of David Callan, a professional hitman for a shadowy governement service, brought him stardom and a prestigious BAFTA of Best Actor. Callan (http://www.youtube.com/watch?v=IDdSWjpPJDg) ran from 1967 to 1972 on Thames Television and the character returned for a 1974 feature film and a 1981 television movie.

Edward Woodward's "Mr Jones" in the final season of La Femme Nikita (1997-2001) was an obvious nod to Callan and McCall, and for your humble servant, one of his greatest roles.

Woodward was a stage actor and his movies include classics such as The Wicker Man (1974) and Breaker Morant (1980). In 2007 he appeared in Hot Fuzz and in 2009 in British soap opera Eastenders.