SAVE THE CHEER... SHOWRUNNER 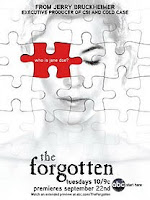 The UK may think twice before fully embracing the US Showrunner system in its TV industry (1) as it seems that another showrunner of an ABC series will give up the keys of the soundstage.

After Marc Guggenheim (FlashForward) and Scott Peters (V), The Forgotten exec producer/showrunner Lukas Reiter is, according to The Hollywood Reporter (2), "not expected to continue" after the choice of ABC to pick up five more episode of the crime drama.

And we learn in the same THR story that ABC drops Eastwick. Based on John Updike's book The Witches of Eastwick, this adaptation is in fact the third attempt to make a TV show out of it (after two failed pilots in 1992 and 2002). Director David Nutter was meant to be the "lucky charm" of this TV version (there's of course the 1987 movie adaptation with Jack Nicholson) with his record of having all his pilots picked up to series (http://www.variety.com/article/VR1117999808.html?categoryid=1300&cs=1).

But that was not enough for what everybody expected to be Desperate Housewives meets Charmed (or is it the reverse?) and it's too bad for the talented Canadian actor Paul Gross.