NAME THAT TUNE... NOT 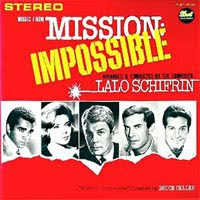 In his latest episode (1) he talks about the progressive extinction on US Network television of TV series regular scores, from the title theme (Neil Patrick Harris made a joke about that during Primetime Emmys) to even incidental music, and explains why songs are the only commercial concession to the musical illustration of an episode.

I must say that I consider this phenomenon one of the most irritating problems of contemporary American "generalist" television. To talk only of my favourite TV series, which is British, I can't imagine an episode of Doctor Who without the theme composed by Ron Grainer. A title theme is the signature of a show, its calling card, almost its DNA map.

Incidental music is the "sound blood" of a series. What would be Mission:Impossible without an incidental theme called The Plot? Would Lord Brett Sinclair be the same driving his Aston Martin without Ken Thorne's music? And in a nightmare represent yourself these two shows without their title themes but with just title cards.