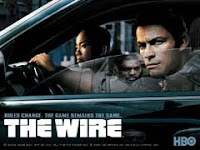 Broadcast reports that Eddie Berg, artistic director of the British Film Institute (BFI), urged the BBC to follow the example set by US pay-per-view channel HBO by taking bigger risks with its drama and comedy output.

Mr Berg was speaking in advance of a special HBO tribute weekend to be held at the BFI in April and names The Wire (2002-2008) as an example of HBO's risk-taking drama model. When it comes to the evaluation of the state of British television fiction, particularly the state of BBC drama, The Wire is systematically praised as the zenith of American drama. And it is systematically and amazingly compared to programmes completely different by their nature and their format (http://www.guardian.co.uk/media/organgrinder/2009/oct/29/the-wire-us-television).

Recently, some voices came in defense of Troy Kennedy Martin's Edge of Darkness (1985) after an article of The Guardian TV Club (http://www.guardian.co.uk/tv-and-radio/tvandradioblog/2010/jan/20/edge-darkness-drama), where the eco-thriller masterpiece was dismissed for its "slow pace" and because it was "less involving" than the Law & Order UK episode of the week on ITV1. Respected blogger Frank Collins, invited by The Thumbcast, responded with his usual flamboyance - we can't deny we like Frank and his blog, it's written not far under the name of his noble house (http://cathoderaytube.blogspot.com/).

« Edge Of Darkness is now, without a doubt, preserved within that catch all descriptor of ‘archive television’, which these days seems to denote anything not made in the last five years. Well, at least nothing that matches up to The Wire, which The Guardian seems to believe is the ultimate television text in front of which all other television drama must prostrate itself and deem itself not worthy » writes Frank (http://thethumbcast.com/guest-blog-the-quality-of-television-is-not-s).

Well, British television fiction is facing many issues these days. We are certainly at the end of a cycle which started with the modern version of Doctor Who (2005). And BBC dramas or comedies have their share of problems, your humble servant often points them out in this blog. The Beeb tends to rely too heavily on "names" (both for writers and actors) and franchisable genre concepts. But duplicating a US pay-cable show like The Wire would not help the Corporation, imitating US networks neither.

Look at Material Girl, BBC One's Ugly Betty. Where is Ugly Betty now anyway? Even with the current economic climate weighing on budgets, the BBC continues to deliver quality fictions and have some interesting material in its drama lineup for Winter/Spring 2010. Idris Elba stars in Luther, fans of The Wire should love it.