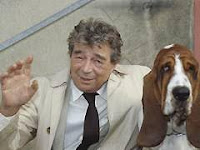 [12.30 - French Time] Read on the blog of La Gazette du doublage, the website of my friend François Justamand (1). French actor Serge Sauvion has died at the age of 80.

Serge Sauvion was particularly popular in France for his contribution to the dubbing of many US television series. Especially one which made him literally an iconic part of French popular culture: Columbo.

The savorous rendition by Sauvion of Peter Falk's lines as the lieutenant marked generations in France, becoming a favourite among impersonators, in numerous skits, TV variety shows, or in diners. Even around coffee vending machines at work.

Actually the huge success and popularity of Columbo in France (even in reruns) owes a lot to Serge Sauvion, who certainly made him more French than American without betraying him a single second. His voice perfectly matched Falk's own voice.

For TV Sauvion was also the French-speaking voice of Peter Lupus in Mission: Impossible, of Robert Blake in Baretta, or of Stacy Keach in Mike Hammer and its sequel shows.

He was also the voice Burt Reynolds in his greatest movie hits.

(1) La Gazette du doublage is both a website and a blog.