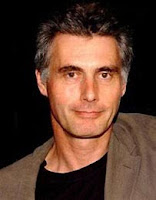 [10.20 - French Time] Interesting interview of Stephen Garrett, the head of Kudos Film and Television, by Maggie Brown on the website of The Guardian. Kudos is of course the indie behind Spooks, Life on Mars, Hustle, etc.

Former exec at Channel 4, Stephen Garrett founded Kudos in 1992. Spooks, launched on BBC One in 2002, paved the way to a string of innovative hits which made the company one of the UK's most valuable independent drama producers. Garrett sold Kudos in 2006 to Elisabeth Murdoch's Shine Group for £35m. Funnily enough, both Spooks and Life on Mars were rejected by Channel 4!

Stephen Garrett explains why he believes that independent production sector suffers from BBC budget cuts and therefore why "high-quality homegrown dramas such as Spooks could be an endangered species". We learn in Maggie Brown's piece that this show costs just under £900,000 an episode, partly because of the action shots, special effects and stunts.

The current economic climate certainly favours international co-productions like the BBC version of Wallander or the next two seasons of the resurrected Primeval - in which BBC Worldwide is strongly involved. But Primeval is a genre franchise, originally devised to duplicate the success of Doctor Who, and sold in more than 40 countries.

Hard recession times are definitely weighing on BBC hits. Series six of Hustle, moved to Birmingham for production cost purpose (and local co-financing), and in some respects series eight of Spooks, are the latest illustrations of the situation. Last month Maggie Brown reported that several long-running BBC dramas will soon get the axe in order to make room for new projects (http://www.guardian.co.uk/media/2010/jan/13/bbc-drama-ben-stephenson).

A ninth series of Spooks is anyway in the pipeline and the BBC has commissioned to Kudos an eight-part drama series called Outcasts, set in 2040, and already much talked about. "Endangered species"? Torchwood apparently moves to the US and we are at the end of a quality cycle initiated with the modern version of Doctor Who in 2005. We'll see how the BBC drama budget cuts impact the upcoming series five of one of the Corporation's most lucrative franchises.