ALL CREATURES GREAT AND SMALL (FOLKMANIS AND CRAIG FERGUSON) [1/2] 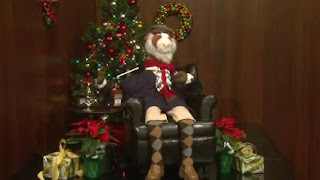 The Scottish-born American comedian hosts The Late Late Show with Craig Ferguson, produced by Letterman's company Worldwide Pants. One of the features of his show is the use of puppets as regular characters: Wavy Rancheros (a "crocodile-alligator"), Aquaman, Sean Connery, etc...

When The Late Late Show with Craig Ferguson celebrated its 1000th episode in December 2009, Wavy and its puppet colleagues took over the studio. Elaine Kollias, Marketing director of Folkmanis, the company behind these zany creatures, has gracefully accepted to answer to questions about the puppets, the company and the event.

Could you tell us a few words about your company and its history?

Elaine Kollias: Folkmanis is considered the world's leading puppet maker with over 250 styles and sold in over 15 countries. Judy Folkmanis started the business in the late 1960's by sewing puppets for her two young sons. Other parents loved her designs so a demand was born.

Judy cut and sewed puppets on her kitchen table for many years - selling her puppets on Berkeley's famed Telegraph Avenue where many street artists hock their wares. Finally, Judy's husband, Atis, thought they should actually try to make a real business out of it and he gave them 1 year to try.

They never looked back. In 1976, they hired seamstresses, found a building to set up shop and a company was born!

How did you get involved with The Late Late Show with Craig Ferguson?

Elaine Kollias: Back in December of 2008, I received a phone call from a consumer and a Craig Ferguson viewer who called to confirm that it was our Long-Legged Monkey that had appeared the night before as "Kronos, King of the Monkey People".

This viewer wanted to find one for his daughter. So to confirm I searched YouTube and there it was. Indeed it was our puppet! Then, we called the show to ask if we could send Craig a box of puppets and the rest as they say, is legendary...

Can you tell us which characters your company devised for the show?

Elaine Kollias: We custom built Aquaman, Sean Connery, Craig as a bull (not seen), an Ostrich starlet (not seen), and we were working on a Camel action-star when they pulled it because the show was getting too full. We also customized a Chihuahua and Beagle to be stand-ins for Jeff and Chris, the two male dancers who are really assistants.

The Chihuahua was in bondage gear while the Beagle wore a suit and eye glasses. Perhaps these unseen puppets will turn up on the show someday.