BLAME IT ON RIO 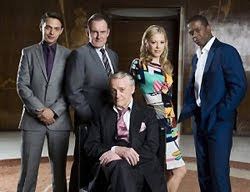 Episode 2 of Hustle series 6 on BBC One yesterday evening. Albert (Robert Vaughn) takes a break and a plane to - where else? - Las Vegas. While the team is leaving the airport, Ash Morgan (Robert Glenister) is greeted by a face from his past, "Liability" Finch (Mark Benton), whose monicker is up to his incompetence as a burglar.

His latest job, a Van Gogh stolen in Brazil, caught the attention of a tenacious Head of Customs, Clifford Davis (Nick Sidi). But the painting is in a locker in a Brazilian airport and Finch requires the assistance of his old friend "Three Socks" and Mickey Stone's team to bring it back. Mickey (Adrian Lester) and Ash refuse but Sean (Matt Di Angelo) offers his help. Things go wrong for the unlikely tandem and Mickey is blackmailed by Davis. The super copper wants the gang to get the painting and con Finch or Sean will go to jail.

An uneven episode which should be to forget at once without the performances of Mark Benton as "Liability" Finch and Nick Sidi as unscrupulous Customs agent Davis. Add some nice comical scenes like the Brazilian Job opening sequence or the flashback with Ash and Finch - almost out of an Ashes to Ashes episode.

In fact the script seems to cope with shooting and budget issues. Mr Robert Vaughn gets some days off and it's understandable but the rest of the Hustle team works seldom united. The "ITC effect" of the move from London to Birmingham to contain production costs (and get welcome subventions) gets worse. At their peak, production values of ITC shows had the standards of a movie (i.e. The Persuaders) but at their lowest, Jason King could visit a France where all the inhabitants wore berets and he could drive his Bentley through Fontainebleau thanks to a screen.

No such obvious tricks in Hustle but the "disguise" of Birmingham as London, with the little help of a few London stock shots and one scene near The Gherkin, gives a surreal feeling to the story setting. Particularly in the airport(s) scenes (1): why was I expecting Roger Moore to pop up as Simon Templar when I saw the unsubtle London 2012 poster?

The description of the "Coffee scam" given to Liability by Mickey and his friends really breaks the momentum of the episode with one of these sequences much too light that almost killed the show in series 3 and 4. Hustle is a modern day Mission: Impossible with an exquisite British touch and a social subtext, not Minder.

Update (13.30 - French Time): Short head win for Hustle on BBC One vs a brand new Law & Order: UK episode on ITV1 at 9pm. 5.9m for our grifters and 5.7m for the British version of the Law & Order franchise. Kudos (the production company of both shows) competing against itself! (http://www.broadcastnow.co.uk/ratings/bbc-beat-itv-in-drama-battle/5009550.article)