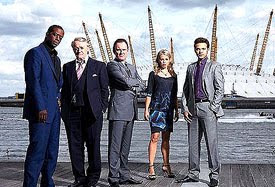 [6.00 - French Time] Hustle Series 6 Episode 3: Albert Stroller (Robert Vaughn) is in Chinatown to put the final touch to a con on Phil (Colin Baker) and his brother-in-law, Charlie. But Charlie is "Czech Charlie" (Velibor Topic), a notorious hard-man not to mess with unless you're terminally ill. Albert decides to leave the game when Phil dies of an heart attack.

Except that Charlie wants the money promised or Albert will be in big trouble. Mickey (Adrian Lester) and the team must find half a million to save their friend. Can Luke Baincross (Simon Day) an obnoxious wannabe playboy and a life-sized gold tiger worth ten million pounds be of some help?

Hustle is a modern-day Mission: Impossible, writer Chris Bucknall understands that and delivers one of the best episodes of the show. Actually Bucknall does his own Mission: Impossible in the most elegant way. Of course you must endure the blasphemy of the death of the character played by Mr Colin Baker (BUCKNALL! *shakes fist*) right in the beginning, but this episode is a pure wonder.

A genuine threat, a friend in need, a Russian doll caper with the good jokes right when you shall have them unlike that farce which was series 4. And a team spirit which was absent of previous episode (a problem of schedules?). Even Eddie (Rob Jarvis) has his share as a petty Tom Cruise as Brian Flanagan (Cocktail) impersonator.

Kelly Adams (Emma) is amazing and Matt Di Angelo (Sean) is perfect. Ash (Robert Glenister) is very "Barney Collieresque" and Simon Day is a brilliant guest star. Director Sarah O'Gorman makes a clever use of the locations. The music score has nods to Mission: Impossible and Eye of the Tiger. The final scene is great.

It takes five thieves to have fun.