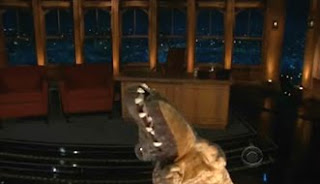 I'm a big fan of puppetry. I grew up watching things like Sesame Street, The Muppet Show or the shows of Gerry Anderson.

When the talented American (born in Scotland) late night show star Craig Ferguson, host of The Late Late Show with Craig Ferguson on CBS, did his 1000th episode all with puppets, I couldn't resist to contact Folkmanis.

Folkmanis, Inc. is the company behind the wonderful and zany puppets which regularly appear in Craig Ferguson's show. Elaine Kollias, Marketing director of Folkmanis, has gracefully accepted to answer a few questions.

You'll be able to read this interesting interview today or tomorrow if Wavy Rancheros (the crocodile on the photo) doesn't eat me.
Publié par Thierry Attard à l'adresse 07:23