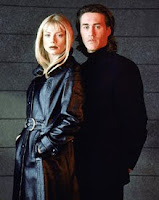 [21.50 - French Time] This news from THR could easily qualify for our Things to watch in Hollywoodland when you're dead feature: The CW has picked up a pilot for a 2010 version of La Femme Nikita co-exec produced by director/producer McG (Chuck, Human Target).

The original movie, Nikita (1990), was about a young criminal woman trained to be an assassin by a top-secret government agency. It was directed by Luc Besson and starred Anne Parillaud. The story (written by Besson) was remade three years later in the US as Point of No Return, with Bridget Fonda.

In 1997 the movie(s) became a television series called La Femme Nikita and produced in Toronto for USA Network, with the excellent Peta Wilson as Nikita. Wilson was surrounded by a great cast: Eugene Robert Glazer as "Operations" - the cynical boss of Section One, Alberta Watson (The Sweet Hereafter) as Madeline, etc.

Roy Dupuis, a superstar in Quebec, played Michael. Dupuis was even in position to contractually ask to dub himself in French language for the airing of the show in the Canadian province, whereas the other voices heard were French as the series was dubbed in Paris (with the French voice of Tom Hanks for Dupuis in France).

Season 5 (2001), guest-starring the legendary Edward Woodward (Callan, The Equalizer) as Mr Jones, is one of the best works ever done in the spy/thriller genre on TV. The influence of La Femme Nikita is visible in shows like the underestimated Quebecer series Haute Surveillance (2000) or 24.

According to The Hollywood Reporter, in the new version Nikita is going rogue and a new assassin is trained to replace her. We'll see if this pilot finishes in the White Room.