REX IS NOT YET YOUR LAWYER 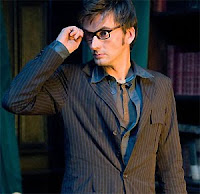 [5.17 - French Time] According to Michael Aussiello (Entertainment Weekly), American network NBC has delayed its verdict on Rex Is Not Your Lawyer, a one-hour pilot for a legal dramedy starring David Tennant (Doctor Who) - after considering the potential show for this spring.

In this pilot Tennant is Rex Alexander, a top Chicago lawyer who begins suffering panic attacks and takes up coaching clients to represent themselves in court. Jerry O’Connell, Abigail Spencer, Jane Curtin, and Jeffrey Tambor co-star. In November I humbly suggested that NBC should drop the title and remarked that in continental Europe "Rex" evokes an Austrian cop show starring a German shepherd dog. I added that the idea of Tennant playing an attorney escaped from a David Kelley show suffice.

Well, talking about David E. Kelley, the Peacock has recently ordered him a pilot called Kindreds, with another "unconventional kind of law practice" from the man behind LA Law, The Practice, Boston Legal, etc. According to Michael Aussiello's article, Rex remains under consideration for Fall.

If NBC executives are not vaccinated by the terrible ratings of The Deep End on ABC this month. It seems that David Tennant will have to wait a little more before moving to Los Angeles to become the next Hugh Laurie.