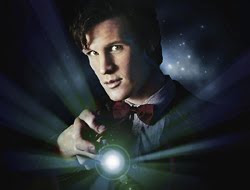 Number Five, I mean. Your humble servant missed the news at the time: according to Doctor Who Magazine (DWM), a respected reference about The Doctor and the Whoniverse in general, series 5 of the contemporary version of the franchise now starring Matt Smith is produced and will be promoted as... series One (1).

Now Steven Moffat, the new showrunner, gives us the explanation in an interview published in the new DWM (417) and, well, it's complicated: « It's Series Thirty-One of Doctor Who, and it's Series One of Matt Smith's Doctor. Those are both real numbers. I submit that 'Series Five of Doctor Who' means absolutely nothing unless you really believe that Matt Smith is the Third Doctor. Everyone knows he's the Eleventh Doctor so that means it's definitely not 'Series Five'. Whichever number you choose, 'Series Five' is the one that's flawed. »

What is shown in the first trailer of (I'm sorry, I'm so sorry) series 5 recalls of series 1 (the series "one" with Christopher Eccleston, of course) and 2 - which is a good point. There is the young and dashing allure of Peter Davison in the latest promo picture of Matt Smith (http://www.digitalspy.co.uk/tv/s7/doctorwho/tubetalk/a194633/whats-that-in-matt-smiths-hand.html). And it's another good point.

Is there something we should begin to worry about?